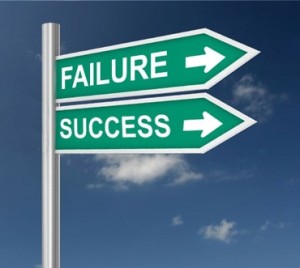 After six months of hard work, we were sitting together on a warm spring afternoon enjoying a beer in one of Melbourne’s new hipster bars. We had learnt a lot, travelled all over Australia and met amazingly passionate people. We’d put together a lean startup with a focus to test a simple business idea and we’d heard countless times how much our tools were needed. There was only one problem. We had failed.

It was over. We’d decided to fold the company. Our hypothesis that Australian Manufacturers would collaborate as a means to an end and thereby solve their problems was false. We had tested it with a dozen SMEs and a group of billion dollar multinationals. In both cases we had failed to get the companies to commit. So we sat there and looked at each other realizing it was a failure we had to embrace and not a success. But how would we cope?

Our problem is one faced by everyone from lone entrepreneurs to global corporations. Things go wrong, perfected plans fall apart and momentum grinds to a halt. We were not alone. But everywhere we looked, phenomenally successful businessmen were telling us to embrace failure, to learn from it and benefit from its edifying nature. It was just when you were broke and had to admit to the failure, it seemed a lot easier said than done.

The lean startup methodology tells us to fail fast to learn fast. Iterate through the build, measure, learn cycle as quickly as possible to improve our product market fit. Top product developers opine on the benefits of failure. According to an article in the Journal of Neuroscience, the lack of success has even been proven to be a better way to lead to disruptive new ideas than success itself because it forces us to look for alternative strategies! The problem is no-one says what to do when it all goes wrong. What to do when you fail.

If we turn to statistics, then the best thing an entrepreneur can do is to get up and try again. Numerous studies show that a second time entrepreneur is more likely to succeed than a first time entrepreneur. In fact, in Business Insider it was been claimed that one of the reasons why Israel’s startup scene punches so much above its weight is that most entrepreneurs have a number of failures under their belts.

When we get to the bottom of it, innovation is all about taking risks. To drive innovation in large corporations it is critical to have a culture which embraces risk taking because the flip side of taking risks is that failures will occur. A company culture which demands innovation but does not support and accept failure is clearly one which is destined to fail. Obviously this is not to endorse failure due to sloppy work or avoidable mistakes. Failure arising from testing the unknown is the type of failure which can be valuable and must be allowed.

Jorge, one of the world’s top innovation bloggers, recognizes the importance and difficulty of failing. Having been part of a number of failed enterprises he wrote “[I]n order to figure out which ideas will work, people move fast to implement those ideas. I’d argue that more important than that is the ability to recover from failure just as fast”. So what I’d like to know is how do we quickly and sustainably recover from a failure?

To answer this we turn to the most reliable source of answers – cutting edge research. For companies the latest research points to creating frameworks to support failure. Whether that is failure tolerant leaders, collaborative innovation schemes to share risk or an empathetic corporate culture, Harvard Business Review listed many ways companies can support the necessary failure involved in any risky innovation. The benefits? Companies which develop such a supportive climate, and provide employees with psychological safety to pursue their initiatives and an article in the Journal of Organizational Behavior showed this has been positively related to a number of firm performance measures.

For startups and entrepreneurs one of the best way to deal with failure is to be realistic and not fall victim to the latest wave of romantic headlines about “youngest billionaires” ever. 90% of startups fail and this applies to you. If you don’t think you are the special 10% but one of the 90% and set yourself the goal of starting three or four startups from the outset (or at least pivoting three or four times), then you will be able to cope with the failures that much better. This has helped me significantly – to know I’m not a lone loser but just like everyone else. It gives me the edge to grit my teeth, dust myself off and go again.

In addition to that, I have spent the last few years thinking about how we can reduce this level of failure and the result is my new book “Innovation Tools”. It lays out a method to help companies innovate in a low risk way to avoid the one thing we have discussed here the most – failure.

Another strategy which worked well for me is to launch all three of my startup ideas at the same time while I was still validating the market for each idea. This not only brings you faster to your goal but a Harvard Business Review report even demonstrated that when pursuing multiple businesses at the same time, the failures in one business seem to help raise the chances of success in the other ventures! The added benefit is that it will force you to focus on the core of each business and help you stick to doing the minimum to test each idea instead of adding unnecessary bells and whistles too early – a core part of methodologies such as the Lean Startup.

Coping with failure is important not only for us psychologically but for the economy at large but many people simply don’t know how. As Jorge put it succinctly “Failure isn’t the goal as it relates to innovating. Rather, your ability to recover from failure fast is just as important as your ability to fail fast.”