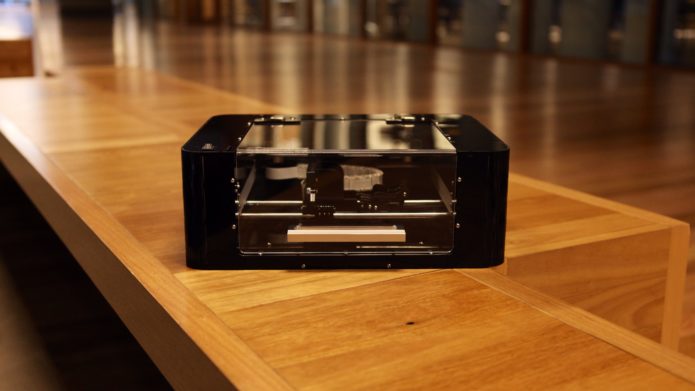 Cartesian co-founder Ariel Briner talks about their new Argentum Circuit Board printer at Sydney Maker Faire . About six months ago I wrote an article 5 real problems I really think need solving for our readers who may have been looking for a problem to solve and new business to create. Turns out it is one of the most popular articles on the site remaining in the top 10 read every day for the last 8 months.

One of the five problems/opportunities was creating the new tools of the next Industrial Revolution by building Rapid Prototyping and Small Volume Manufacturing Machines that could afford to be purchased by a local hacker space or even individuals.

I am nearly finished a (not so) rapid prototype for a wearable hardware device and one of the things I can say with some conviction is that the faster you can find errors in your designs and correct and test them the cheaper and faster the overall production will be.

You can breadboard designs but most newer components are too small for breadboards and many new components are only available as surface mount which need to be soldered directly to a PCB to work. You can send it to your PCB guy in China, but even with fantastic service it still takes 4-5 working days to get back bare PCBs.

What if you could build and test your circuit in your office or garage in a few hours on a Rapid Prototype Machine?

Enter the Cartesian Argentum Circuit Board Printer. Essentially this prints circuit traces using a conductive ink made from Silver onto a paper substrate, you can then surface mount components straight onto the substrate using solder.

Ariel Briner, one of the co-founders explains the product

Originally launched as a Kickstarter Project named EX1 they managed to raise $137,000 with a $30,000 target and have just started shipping their first batch of Kickstarter order pledges this month, you can buy an Agentum as a kit for $1600 or fully assembled for $2000.