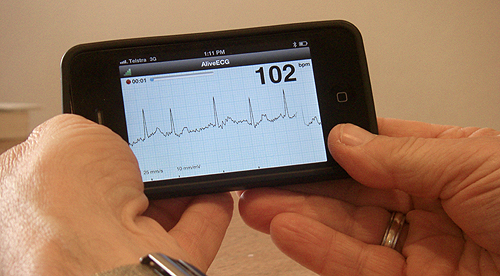 Iphone App detects heart rhythm that could lead to stroke

A team from the University of Sydney has created a special iPhone case and app that can be used to quickly and cheaply detect heart rhythm problems and prevent strokes. The research found the AliveCor Heart Monitor for iPhone (iECG) was a highly effective, accurate and cost-effective way to screen patients to identify previously undiagnosed atrial fibrillation (AF) and hence help prevent strokes and the test is able to be used in local pharmacies and general practitioner surgeries with a single-lead ECG taken on an iPhone with a special case and is being trialed in GP surgeries.

Many of you would have heard me rant about startups focused on 1st world Silicon Valley problems and how so many startups I see are solving trivial non problems, well I am happy to say this story is the complete opposite. You also know I love seeing hardware projects being prototyped here in Australia so double kudos from me. In my opinion this is a major win for reducing strokes at the same time doing so in an extremely elegant and inexpensive way.

“We are now getting receptionists in general practice to record an iECG before patients see their doctor,” Lead Author and Researcher Ms Nicole Lowres said.“Our economic analysis has shown the iECG is highly cost-effective and in fact this is the first mass screening program that is likely to be cost-effective, unlike traditional 12 lead ECGs recorded by a practice nurse, also the iECG is extremely portable, which gives great flexibility for screening, and is simple to administer.

Senior author, Professor Ben Freedman, said that the device was an exciting breakthrough and would greatly assist in the challenge to improve early identification of atrial fibrillation and prevention of stroke.

“Atrial Fibrillation (AF) is the most common heart rhythm problem and is responsible for almost one-third of all strokes,” he said.

“AF increases with age, affecting more than 15 percent of people aged 85 years and over. And people with atrial fibrillation face up to a five-fold increased risk of stroke, and tend to have more severe and life-threatening strokes. Research found that about 1.4 percent of people aged over 65 (50,000 Australians) have atrial fibrillation, but do not know it. There are a large number of people with unknown AF who are at high risk of stroke, but who are not on any medication. The good news is that stroke is highly preventable with anticoagulant medication, such as warfarin, or the new oral anticoagulants, which can reduce the risk by 66 percent”

“The iECG allows us to screen patients for atrial fibrillation in minutes and treat people early. This is a huge boost in the fight to reduce the amount of strokes, particularly in people over the age of 65,” Professor Freedman said.

In my opinion this is arguably one of the most cost-effective screening solutions I have seen, an app, an inexpensive case and an iPhone, whilst it is not going to replace normal ECG machines and operators, it will make testing more accessible and cheaper and will pick up more cases that may have otherwise gone undetected.

This is an awesome step forward to saving lives and preventing the massive disruption and costs that Stroke victims and their families endure and a great example of cross discipline co-operation between Medical Skills, App Skills and some electrical engineering.

About the iECG: When taking a reading, the iECG can be seen on the iPhone screen in real-time. In addition, the iECG is transmitted to a secure server (cloud) where a specialist can review the iECGs remotely. The website can automatically analyse the reading to make a diagnosis of AF. The researchers tested the website’s automatic prediction in the SEARCH-AF study and found it correctly diagnoses atrial fibrillation 97 percent of the time.