Ed: Bullet News pitched their site to us which inspired this long rant, you can see their pitch at the bottom.

People forget or don’t believe that industries change dramatically or disappear permanently. If you want a refresher, read the seminal Harvard Business School paper “Marketing Myopia” one of my favourite’s. I read it in my early 20s and had a permanent effect on the way I view industries and business.

Nothing is forever, all businesses die and no one realises they are dead until its too late.

The News industry is a really interesting study in business evolution, the dynamics are changing so quickly.

Traditional publisher metrics are being smashed by the Buzzfeed’s, Huffington Post’s and Business Insider’s who rapidly rehash stories from around the web, turning other people’s reporting, tweets and videos into bite sized stories with split tested and measured headlines and images optimised to maximise the click through rate.

I know we still have Newspapers (I saw one the other day) but as the medium shifts from paper to online the most important players in the newsroom are changing.

Once upon a time journalists and editors were a culture unto themselves, they were opinionated, unique, righteous, militant, the story mattered, the words, grammar, the facts, the investigation.

Now everyone has a front page. Anyone can can launch their own page in 30 seconds at a dozen web service providers.

Inventory is unlimited. Getting traction is hard.

But anyone can become a journalist and publisher and tens of millions of people are every year.

Many people predicted the death of blogs, that blogging was started by many but continued by only a few, but due to new sites like Medium and Linkedin’s Influencer network blogging is actually growing significantly.

Interestingly while I write and publish this site I do not consider myself a journalist, Im sure most of you would agree.

The Newsroom Has Been Toppled

Quality sites such as Wired are the last bastion of well written long form content in the technology space.

Almost everyone else is producing one page snippets of text with very little new information.

Lots of noise not much signal.

In the past what mattered was well written accurate investigative reporting, what matters now is page views.

Facts are less critical, entertainment is more important, it’s almost as if mass readers are ok with partially true stories, they would prefer the entertainment now than a factual well written piece tomorrow.

I’m ok with most of these changes except the dumbing down of content, the old world publishers held cities and countries to ransom controlling politics, opinion and trade for over a century.

I think the democratisation of news is fantastic, but it means a lot of changes and possibly destruction for existing players.

Mid-low level Journalists without their own audience are increasingly headed for replacement by robotic writers (and yes it works now for finance and sports and will work for other news soon) and even senior journalists will be forced into a life of freelancing for bit rate articles.

Most publishers pay their freelancers significantly lower rates for online articles vs articles published in a paper.

This cost cutting will continue for online publications. Most of the new age publishers get large amounts of their content for free by rehashing stories from other sites, social media or from content contributed for free by non journalists.

If content is nearly free, publishing is available to all, duplication abounds, where is the value, who makes the profit?

Only Celebrity Journalists Will Make A Living

Mid-low level Journalists without their own audience are increasingly headed for replacement by robotic writers or low level admin staff.

If cut, paste and rehash journalism is the future of driving page views and journalists wages are the key driver of costs, new entrants and existing management are figuring out you don’t need senior journalists to do cut and paste work.

With the exception of Celebrity Journalists and those who still have a job at traditional publishers, Journalists are being forced into a life of freelancing for bit rate articles.

In the future journalists will struggle to make a living or cease to exist unless they have two things.

Future Journalists need their own brand and product (ie column/show/podcast/blog) and their own large following of loyal readers.

Celebrity Journalists will bring their own crowd to the publication and get paid accordingly, or maybe they will just launch their own publication.

Mainstream Publishers Are Not Going to Escape Either

Publishers who simply republish newswire articles are going to struggle. The algorithms already know they are merely duplicating content with very little value add and soon the big traffic referrers such as Google and Facebook will cut the traffic they send.

Facebook initiatives such as Instant Articles continue to move value away from the publisher and I expect Facebook to continue to smother publishers and control their revenue.

If large social platforms are dragging publishers stories and readers away from the publishers website, the publisher is at the mercy of Facebook to monetise their content and we know who will get the best of that deal.

With so much duplication and so much great new writing from non news sources, News & Content Discovery in real time is a non trivial multi dimensional problem, 10,000s of topics and millions of sites producing great content regularly but a the same time massive duplication at the heavy traffic sites.

Google News includes an estimated 50,000 news sites.  Given that most news sites republish major stories from newswire services there is a high amount of duplication and original stories are mostly localised and factual.

Many of the stories could in fact be written by a robot (and will be).

Google and the other large players largely ignore the 50,000,000 blogs powered by WordPress, Tumbler and other micro services and the live reports coming from Twitter, Periscope and Meerkat.

In my opinion the worlds best writers on any given topic are blogging on WordPress sites and the worlds freshest real news is on Twitter and Periscope but neither are created by Journalists or TV Reporters and neither are being widely distributed on Google News, Facebook, Linkedin or Twitter.

For 10 years Google has made very few outwardly noticeable changes to develop Google News. Despite billions of visitors and stories, its trapped in 2000s.

None of the major news aggregators give you any level of control over the stories you see beyond picking the standard 20 categories.

None of the online platforms are not going wide enough or deep enough to find the worlds best writers on specific topics.

Social discovery and curation is very important but it cannot find the diamonds in the 50,000,000 blogs in any meaningful scalable way.

It cannot reliably find new stories on the micro topics that you want to read.

And yet despite 20 years of work algorithmic curators are still very immature. Most of the work in the space is going on in the big companies or in Universities, compared to the rest of the server and platform space AI & Machine Learning feels like its trapped in the 80s.

If most of the worlds most interesting writers are publishing on stories on 50,000,000 blogs about 10s of thousands of topic you need a News Discovery Engine that can parse 1,000,000s of sites in real time and sort them into micro topics for each reader.

And processing and classifying 1,000,000 blogs and news sites in real time is the experiment behind Startup88’s side project Newscloud.io.

As for Bullet News, I like their format and I wish them well, but their product is limited in scope and their current model will keep it that way.

Bullet is currently limited to summarising the stories of a handful of publishers. Normally this would be copyright infringement but they have negotiated agreements with all of the publishers they include.

This model is not scalable they will struggle if they have to individually sign up every publisher, the team at the now original and defunct Newscloud.com tried this and despite great funding and actually being owned by the group of publishers could not penetrate the publishers legal armies, there is a good article on their attempts here.

Once you understand how challenging this problem is, you understand that Bullet is a nice reading format, but its limited by the very model it seeks to replace.

Newscloud.io is still very much an alpha product, it’s crawling 10s of thousands of sites, its sorting into categories and tagging but it remains a work in progress which we hope we can form into a great way to find content on the topics you are really interested in.

Love to hear your feedback on the Newscloud.io platform.

Huge list of Startup, Tech and Science Blogs RSS Feeds you can import into @Feedly 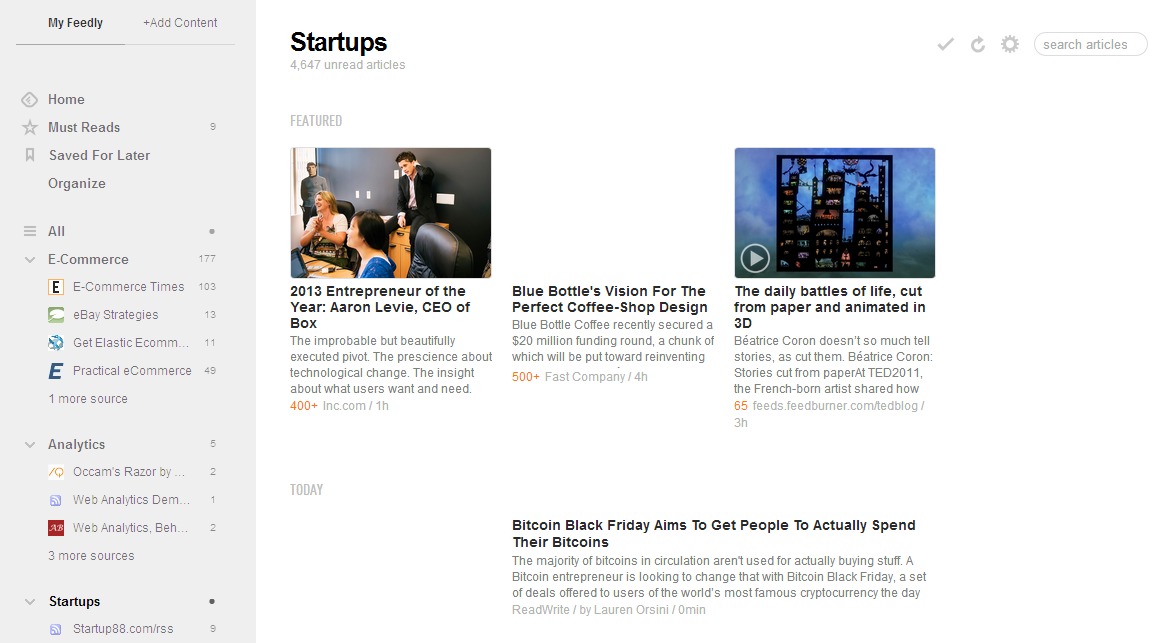 Last week Forbes published their list of 100 Top Blogs and Sites for Entrepreneurs, (here). Its a great collection but unfortunately in their quest to drive page views they divided the list on to 100 separate pages.

Given our frustration with this sort of page view generation tactics we took the liberty of visiting each of the sites and collecting the RSS Feeds for each of them and creating an OPML  file (so you can import the list into your favourite RSS reader) and we then added our favourites to the list and imported them all into our favourite reader Feedly.

To add this to your Feedly Cloud Reader go to your account and Click on the Organise Button and open the Import OPML page http://feedly.com/index.html#cortex

Download the OMPL File and import it to Feedly.

Update: You can also import this file directly into Digg Reader