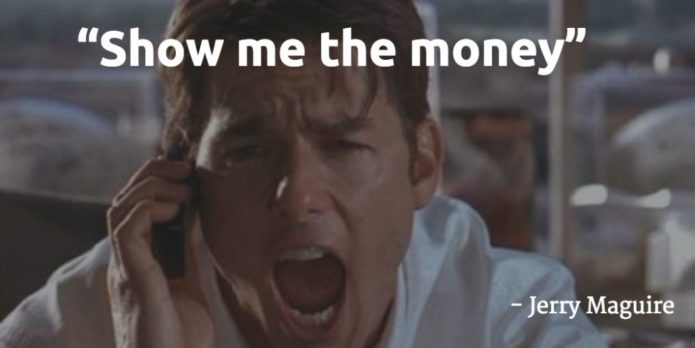 I talk to a lot of startups, last week more than 25. Also I ran a sales team for 8 years and had about 20 channel partners for 4 years so over a 25 year sales career I have run or been in hundreds of sales meetings.

When you have new teams trying to launch their startup or sales career they are super keen but naive about the sales process.

When you start to dig into their business a common theme occurs around potential deals.

When you ask them have they got any customers or deals, they will tell vaguely you that they have a deal with XYZ company, often you will hear this for months at a time.

Upon further digging its becomes obvious that they may have had a conversation with XYZ company or they may have even been to see XYZ company and they maybe quite interested (allegedly) but in fact there is no signed deal.

They are not a customer. They are a prospect and its a very important distinction.

This is unbelievably common, mis-stating a prospect for a deal or customer and worse in many cases the startup believes it.

It’s actually wishful thinking and delusion rather than dishonesty (in fact except in the case of a poor sales person its almost never dishonesty).

In early stage business development you are wishing and hoping some of the prospects you have contacted (usually not enough) will turn into a customer.

Often you will convince yourself that they are dying to become a customer but there are some organisational roadblocks in the way, this prospect wants to sign but his boss is away for 6 months, that prospect is ready but there is a delay with another project, the 3rd prospect is going to take it to their board…..

And yet in my sales career month after month I saw the same prospects on people’s funnels that hung around for a year just didn’t move and that never came in.

I am not being defeatist the reality is that most prospects don’t turn into sales (that’s why you need lots of them).

Any of this wishful thinking sound familiar?

Delusion will kill your Startup.

In an early stage business you have probably only contacted a small number of potential customers and as is always the case many of them are not ideal prospects for you and yet we hang onto the 1-2 people who were kind enough to speak to us and sounded interesting and act like they are going to save the company.

Be honest with yourself, until you have a signed order or proposal or a transaction on your site, anyone you are talking to is either a prospect, trial or pilot user, they are not a customer.

The implication is that you need to learn to build a sales funnel and you as the startup entrepreneur need to be really honest with yourself where your prospects are in the sales funnel.

You have to be ruthless with yourself and your team to ensure you are not deluding yourself about your prospects.

Your business will fail if you delude yourself about the prospects in your funnel.

Your Job – Building The Funnel

Your job as the entrepreneur is to work out how to fill that sales funnel with new prospects and work out how to convert them to customers or qualify them out (and stop spending time on them).

If your Runway indicates you have to get to $100,000 monthly run rate in 6 months time, each customer is worth $5000 per month but you only close 10% of prospects, you have to find 200 prospects to hit that target.

In this instance the delusion usually comes in the confidence level (% chance to get the deal) for each prospect and in the win ratio you think your team can achieve.

My suggestions on a weekly basis.

Sales success is a matter of constantly grinding out the actions each week that lead to results, new meetings, new prospects and proposals, new marketing campaigns, new experiments.

You can’t ever stop and think its done. It never is.