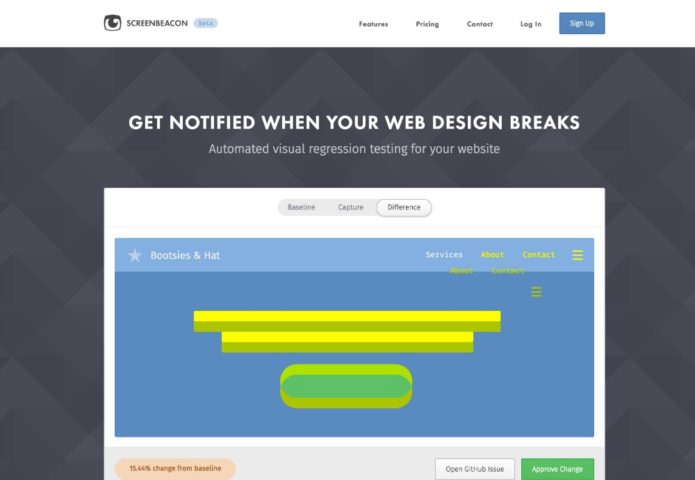 Ed: I am running a number of development projects with numerous coders involved and all of them are working on code which affects the layout of the sites/apps.

Its frustrating as hell when someone changes something, a merge happens and then the site CSS and layout is changed or broken, also when an asset is unavailable ie the CDN is not responding or there has been an image break somewhere so the images are not displaying.

Its even more frustrating when someone else tells me and I didn’t know.

Screenbeacon promises to detect when your sites are not displaying as normal across multiple browsers and devices and alert you and then give you access to the code via Github to review and identify the issue.

If you own a website/app or are responsible for DevOps its a great idea.

PS. Only thing you guys need to do is provide a Slack.com integration

I regularly listen to This Week in Startups which is produced by Jason Calacanis, he does a great weekly video which runs for an hour and has in depth interview with VCs and startup founders, who he manages to get to reveal some pretty interesting stories, often gets them to admin to things they may not have before, its one of the better webcasts for startups and a great laugh at the same time.

Jason does the Web equivalent of a live read for his sponsors (those of you who have ever advertised on radio will be familiar with the concept) and one of the companies he mentioned the other day was Invision a new prototyping, collaboration and workflow platform.

Having tried about 10 prototyping/wireframing/mockup apps in the last year for one of the projects I am working on, I can tell you they pretty well all suck big time on the collaboration aspect.

Also commenting and keeping track of problems is also a major headache, invariably you need to switch out to another platform to track the requests/bugs etc and don’t even talk about keeping version control over design suggestions and mockups, its not trivial or commonly done.

There is a 30 day free trial and the plans seem reasonable including a free plan for only one project. Check it out here Invision App.