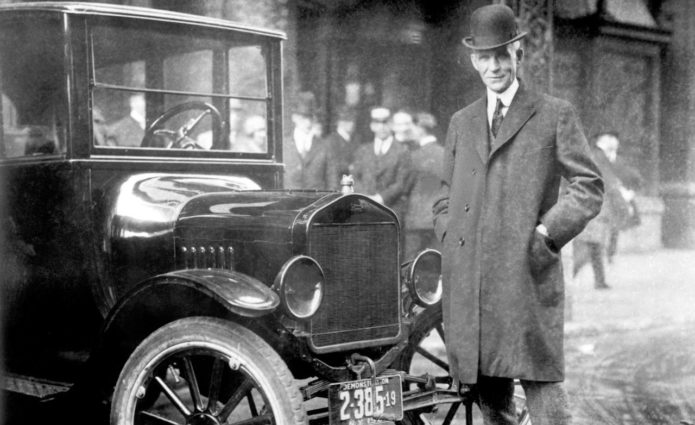 In an article in the Harvard Business Review, Patrick Vlaskovits has decided that the quote below, attributed to Henry Ford, was actually manufactured by one Jean-Marie Dru in 2002

“If I had asked people what they wanted, they would have said faster horses.”

Often have I heard this quoted by those pedalling consulting services that will miraculously transform your employees into great innovators.

The consultant will generally float the idea that there are just two ways to innovate:

Although why you’d sell this latter message to the masses is a mystery. Very few in the audience would believe that they are the next Steve Jobs, so this message might just act to discourage them.

There is a third option, not usually coached, and that is to copy the new and sexy ideas of others shortly after early market success.

In any case, the use of the supposed Ford quote is as silly as business consulting gets. Imagine for example that Henry did ask that question and the people did say ‘faster horses’.

Had Ford been a true innovator he simply would have done a root cause assessment which assumes that a customer doesn’t know what he or she doesn’t know. In which case ‘faster horses’ is translated to ‘a faster way to get to where I am going in or on my own autonomous mode of transport.’

And then the innovator would ask a bunch more questions as to how much this autonomous mode of transport could cost, and whether there are any other constraints or desires associated with it.

This process is then dove-tailed with an assessment of readily available and potentially available technologies.

Eventually a product development process starts, one that balances risks associated with technology, market and financial factors, as per circumstances.

The irony of the Ford quote is that Ford’s only true business innovation was to make just one model of car for almost two decades, the Model T; one that was very reliable, rugged, and most of all, cheap.

Ironically, his cars were amongst the slowest of the era.

After his initial inspiration to make cheap cars, his capacity for innovation was reserved for engineering which was focused on lowering costs, evermore.

For example, in 1914, a whole 6 years after production began, Ford famously changed the colour of the T-Model to black-only in order to save costs.

Cars had been around for 23 years before the Model T came along but they were still the preserve of the wealthy. The middle classes of America did not desire faster horses, just affordable cars.

What Ford actually did say was:

“I will build a motor car for the great multitude. It will be so low in price that no man will be unable to own one.”

Whether he figured this out on his own or by talking to droves of want-to-be car owners seems to be unrecorded.

In any case it was probably quite obvious at the time that everyone would own a car if only they could. Similarly we would all own private jets and luxury yachts if we could.

The real business challenge for Ford was the creation of a financed plan to achieve this goal, along with the development of all the required novel engineering.

For every Henry Ford that is recorded in history there are thousands of similar characters that have been unsuccessful and are long forgotten. The bias in the narrative of the business media towards the adulation of past successful entrepreneurs doesn’t fool too many business leaders. They understand statistics thanks very much!

As a historical note, Ford’s company eventually lost market share because he failed to continually consult his customers as to what they wanted.

Hence he didn’t recognise that his customers had changed; as middle class wealth increased they had started to want genuine choice between models and list options in the cars that they purchased, whereas Ford had just the one standard cheap model with very limited options.

A century later Henry’s company is inflicting Ford Falcons on Sydney’s taxi customers. This doesn’t surprise me one bit; we asked for comfort and space, and Ford brought us rattles, vinyl seats, diff whine and three-quarter rear doors.

“If I had asked Sydney’s taxi customers what they wanted, they would have said teleportation.”

And they got Uber instead! You see, business innovation is a tricky, tricky thing.

Today I am at a business forum and the theme is, yet again, innovation in business.

Henry Ford even got misquoted! He is probably turning in his grave.

Speaker after speaker is telling this room full of business leaders that, in these fast changing and disintermediating times, they have to innovate or risk losing their businesses.

To these business leaders I would make one point; successful business innovation isn’t motivated by fear, it is motivated by excitement.

Or to put it another way, excitement is a necessary but not sufficient driver of successful business innovation.

The excitement is needed to motivate the innovator to happily and irrationally ignore the readily-perceivable and overly high risk factors, and probable failure.

So if you are considering some serious business innovation; if your motivation is fear, then don’t bother!