Created by UNSW scientist Dr Ben McNeil, with UNSW as the official launch partner, Thinkable.org aims to help address major shortfalls in funding for blue-sky research and early career scientists in Australia. Its like a combination of Kickstarter & Angellist for early stage Researchers and Scientists but the contributors dont receive a product or shares. Essentially they are relying on the feel good factor of funding a good or interesting cause. The first scientists who will showcase their research are 5 UNSW Gold Star recipients researchers who’ve already been awarded up to $40,000 by UNSW because their projects were highly ranked by either the Australian Research Council or National Health and Medical Research Council, but just missed out on funding. 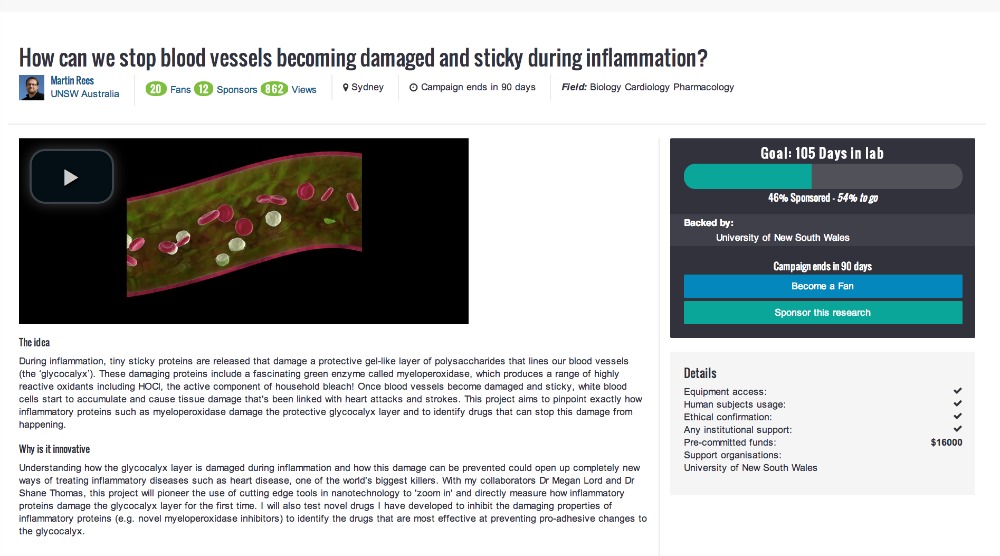 I like the concept and I think it should exist, the problem is real and the existing research funding solutions fall short and take a significant amount of time from the researchers to prepare with a very limited chance of success.

Having said that I don’t think its a business model that will see much success unless they can leverage the platform to allow companies to back research projects of interest and get a meaningful stake or opportunity in the outcome.

This is challenging from an IP perspective given that most of the researchers will have IP owned by their respective employers/Universities.

I want to make the distinction between it being a great idea and a great business, as mentioned its a great idea and should exist, what is not clear is if it can be a great standalone business.

I had a conversation with a UNSW researcher a year ago (who doesn’t appear to be associated with Thinkable.org) who wanted feedback on a very similar concept and my view was that the main people who would use this would be friends and family and the occasional philanthropist, the $ raised probably wouldn’t be enough to run a proper business on.

If they can tweak their model I think there could be a massive opportunity. (note the tweak is not trivial), here is my thinking.

Traditional R&D Labs are being slashed from big corporations budgets, they are being sold off or wound down as they typically don’t show returns in the current or possibly the next 3-5 financial years and short sighted boards and CEOs looking for short term savings are killing their companies long term prospects.

Typically many of these companies are preferring to acquire companies at a later stage with more proof of concept than investing in early stage development, which is great news for those who have spun out their startup but not so good for researchers.

If Thinkable can somehow make this work for companies who want to get in early on promising research and negotiate rights or options for companies who contribute to the research this could become a very early stage version of Angel list for researchers, but until the corporations can get a real outcome from the investment, I think the funding raised will be restricted to friends and family and rich benefactors who have an interest in the project.

In order to negotiate rights of some sort, the commercialisation (TTO) groups at the Universities will need to sign into some sort of research funding agreement which offers some right to participate or option to fund at a later date. This will be challenging to say the least but if Thinkable can achieve a common agreement for funding research and granting options or rights of some sort they will have a property with significant value.

So to any of the Commercialisation folk who read Startup88 (and I know there are a bunch of you), talk to Thinkable and work out what you need to do give some optionality to the funders, if you can do this, you massively increase the chance of success for your researchers.