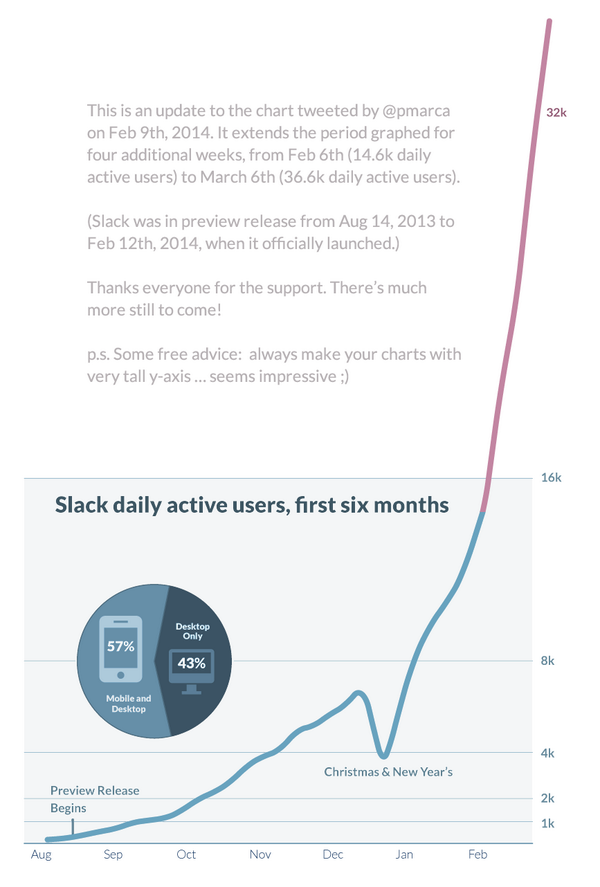 Slack – Is This The Fastest Growing Enterprise App Ever?

Update: Apparently the Daily users are over 60,000 from the last report I can find in late April so this graph would be twice as tall

Slack is apparently one of the fastest growing enterprise software apps in known history. This is most amazing growth curve I have ever seen with a very high % of paying customers. You are too late to invest, they have raised $43m and on their way to being a $billion company.

Turns out the founder Stewart Butterfield who founded Flickr.com and sold it to Yahoo for a rumoured $30-40m (seems like loose change now). Flickr was a pivot from an unsuccessful game which they were about to close down, Butterfield is obviously a gaming tragic.

When he sold Flickr he started on another game called Glitch, also unsuccessful but which pivoted into Slack. Great long story from Wired.com here and an excellent interview by Jason Calacanis with Stewart Butterfield

If you have ever used Hipchat or Yammer or hated wading through email to track subjects and projects and wanted more you will love Slack. One of the most frustrating issues when running a project or startup is getting everyone on the same subject without a massive untraceable unsearchable email storm. Slack solves this problem.

As a business guy who runs a few coding and hardware projects in my day job, I love how this allows code updates from Github to be pushed into the chat history by a tool called a Slackbot.

What is the fuss all about?

Slack is a new form of team collaboration software which goes so much further than traditional chat apps, wikis, intranets etc. 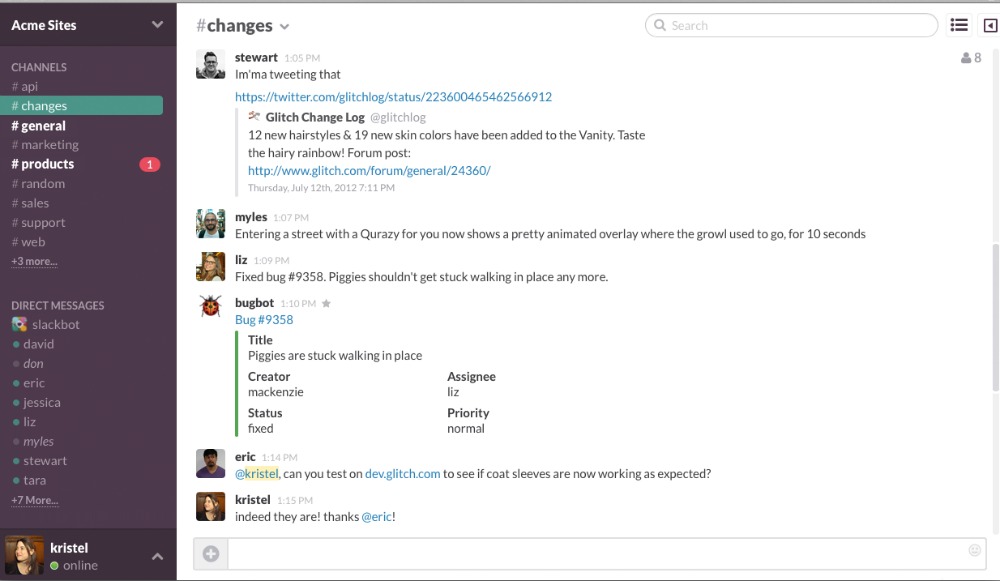 Slack is team communication for the 21st century

Imagine all your team communication in one place, instantly searchable, available wherever you go.That’s Slack. 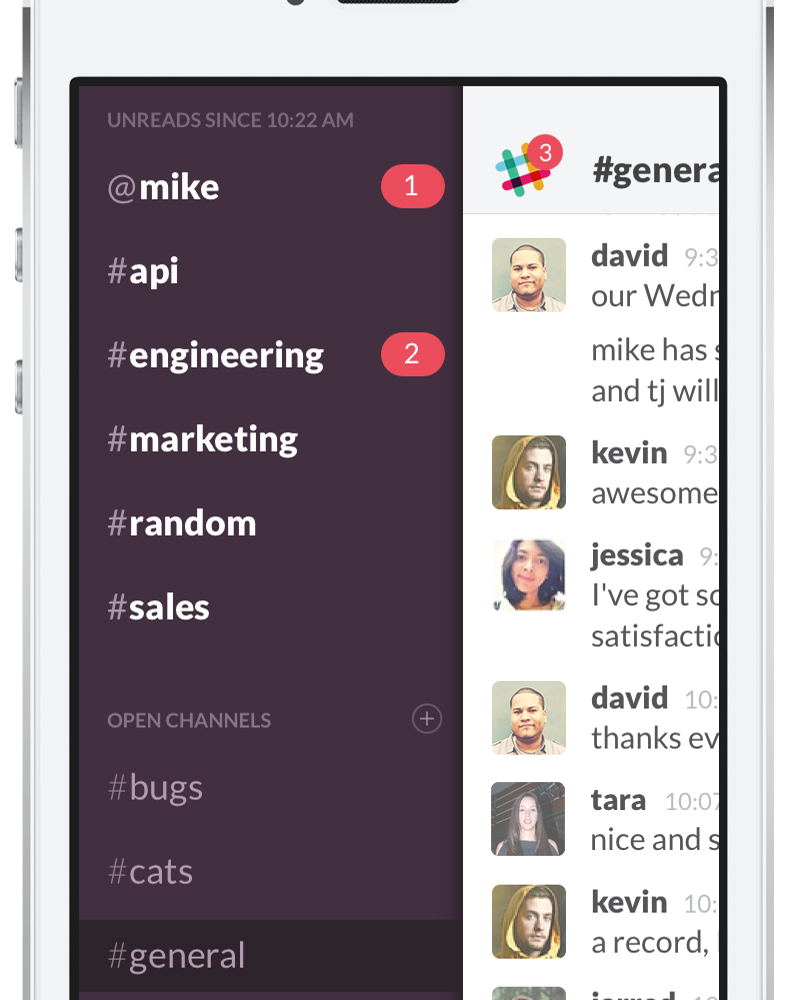 Create open channels for the projects, groups and topics that the whole team shares.

Channels increase transparency by putting knowledge in everyone’s hands. Discoverability, complete history & search across all channels is built in.

Channels include messages, files & comments, inline images & video, rich link summaries and integration with the services you use every day, like Twitter, Dropbox & Google Drive.Slack searches whole conversations, not just individual messages, so you can find what you’re looking for no matter who said what or when they said it. 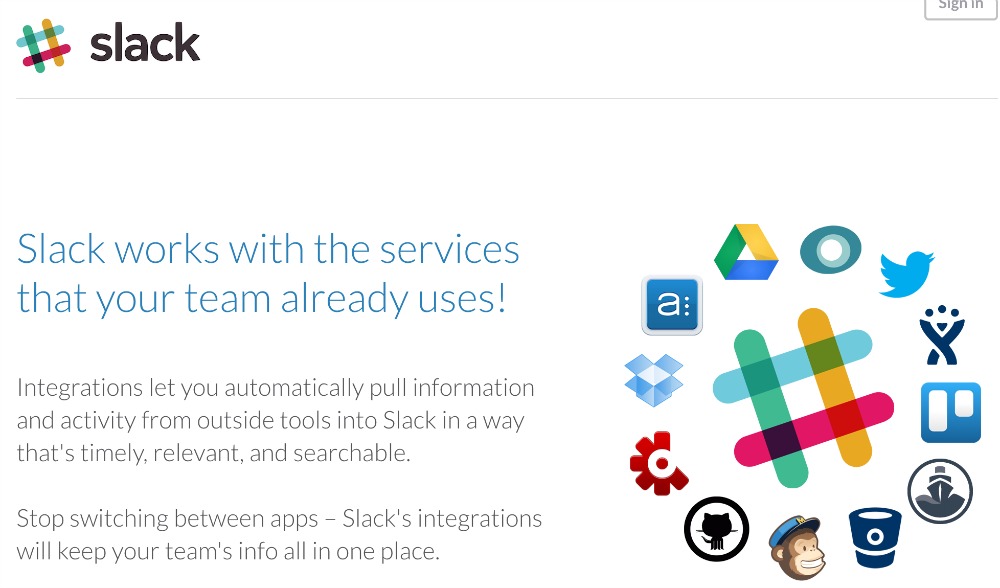 Two built-in native file types let you create files for whatever comes out of your keyboard.

Both posts & snippets have all the features of other file types: comments, stars, public & private sharing, etc.

Slack has fully native apps for iOS and Android to give you the full functionality of Slack wherever you go.

You get access to everything from the palm of your hand: file search and filtering, starred items, the team directory and, of course, all your messages.It may sound complex, but Slack’s read state synchronization is simple: when you read something on your phone, your laptop will know about it and automatically mark those messages as read.Whatever you do on one device — catch up on direct messages, post a comment, upload a file — is reflected everywhere. Everything is in sync. We’ll keep your place so you can always pick up right where you left off.

Slack indexes the contents of every file, whether you upload them directly or through integrations. That means you can search inside Word docs, Google Docs, PDFs, Photoshop files, commit messages —anything you add to Slack.

Flexible file browsing lets you find exactly the file you need.You can sort and filter by file type or by person: a few clicks gives you all of your files, Google Docs from the whole team, or just your own snippets. 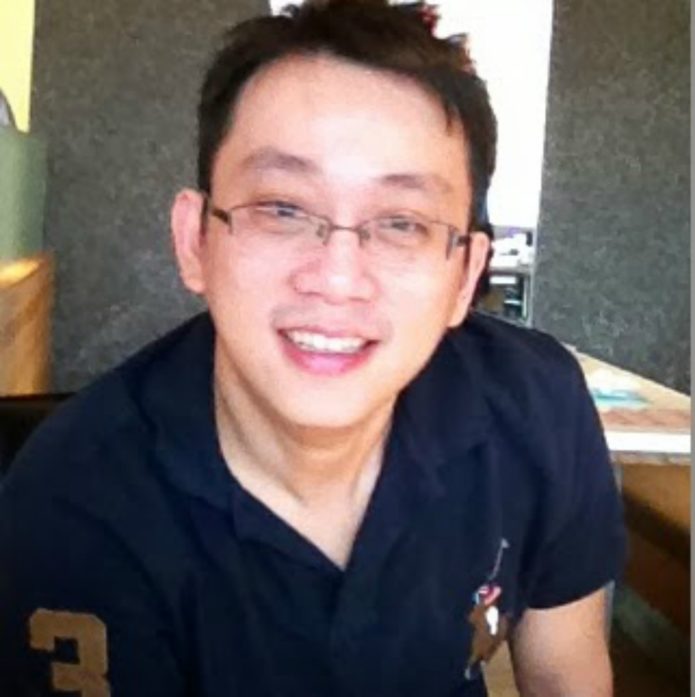 Q & A with Pei-Han Chuang – Founder of Qiito.com one of Asia’s fastest growing travel sites 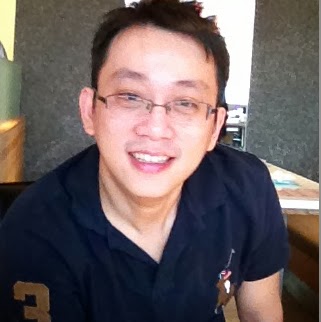 Pei-Han Chuang is the founder of Qiito.com (pronounced key-tow) one of the most successful Asian founded Community Travel sites. Qiito raised $SGD 2 million in 2011, formed partnerships with the Japanese and Taiwan Tourism Boards as well as many other companies and is growing extremely quickly with over 21,000 locations shared with 50,000 photos (this is has risen more than a 1000 in the last 24 hours)

Editor: Hi Pei-Han, you are getting great traction now, users are sharing 1000s of locations a week, but tell us about the early times, the struggles and difficulties you had to overcome to get to this point.

Pei-Han: Let’s set aside difficulty on funding, staffs, cash flow and more, because anything can be solved by money is not really a problem.

The real difficulty to launch a Start-up is to have a strong mind and be passionate in what you are doing. If your motive to launch a startup is to break free from office, to have freedom, be your own boss and be in control, then I will advise you to stay put and do not quit your job.

Because it is exactly opposite, you will not have enough time for your family, enough sleep, enough money and things will not be within your control (until you start to gain traction)

You will have to get used to it and embrace it. Most of time, you feel like you have a split personality and lack of persistence is your worst enemy.You are continuously doubting if what you have done is correct and should you persist with it because expected result has not come in or should you just give up?

Finally, you pull through and have surprising good result. But soon next the bottleneck comes and the mental tug war repeats again.

Trust me, it is mentally abnormal but a fun process. 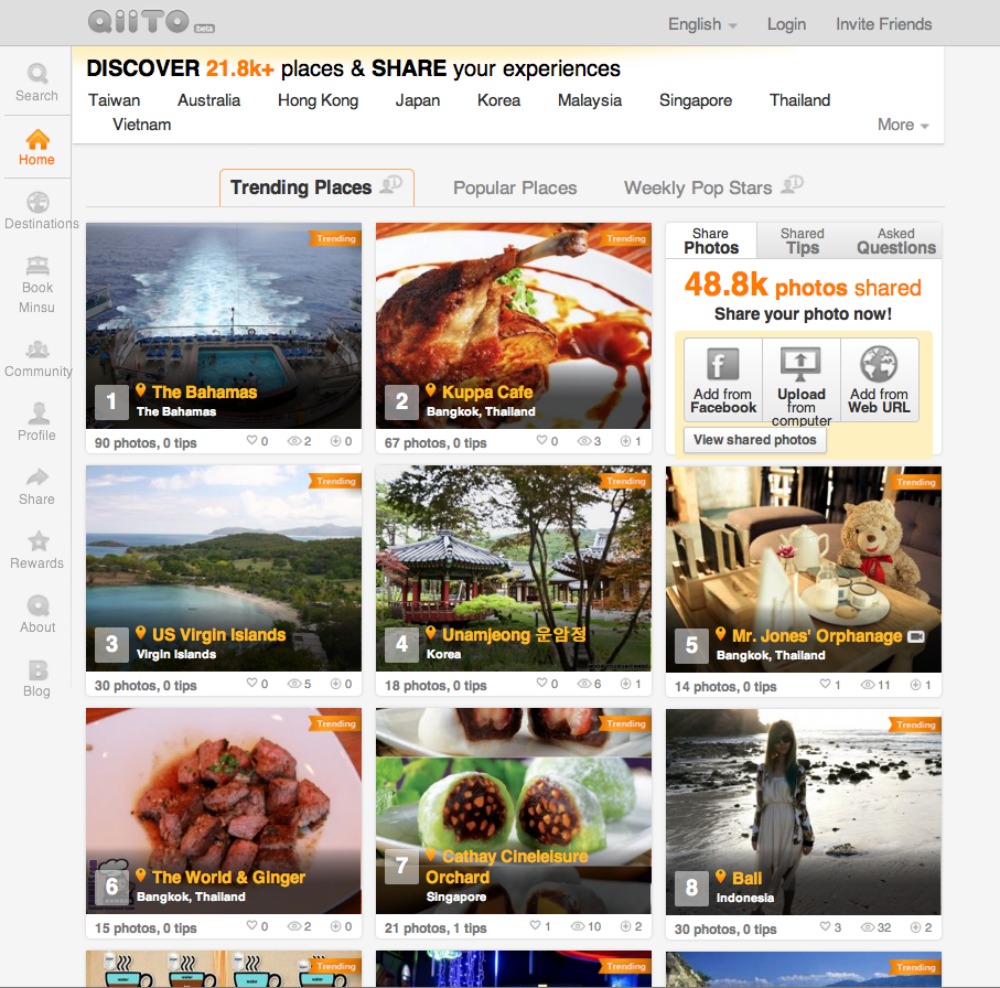 Editor: What have been your big wins and what did you have to do to achieve them?

Pei-Han: Our biggest wins have been getting Government Tourism Boards and major brands to partner with us : http://qiito.com/about/investors_partners

One of our other wins has being one of first movers in Asia Community Travel and the significant growth in users and solving some of pain points in travel industry, this combination has helped us get attention from our existing and coming partners.

In fact, many of our partners found us because either someone in their team was one of our users or someone close to them is sharing our user updates on Facebook.

Many of our users are heroes who help all our users a lot by tagging photos to exact location to make these information usable for all users. Hence we would like to say a big thanks you to all of them in helping all travel lovers to easily find out where & how to go places that they had been to.

Another encouraging thing that we see is our growth in users who shares information and our bloggers base aka Qiito community.

What did we do to achieve this? We stay close to users and be sincere in helping to solve their problems.
to know more what is difference between Qiito and other sites, and how we help http://qiito.com/about/testimonials 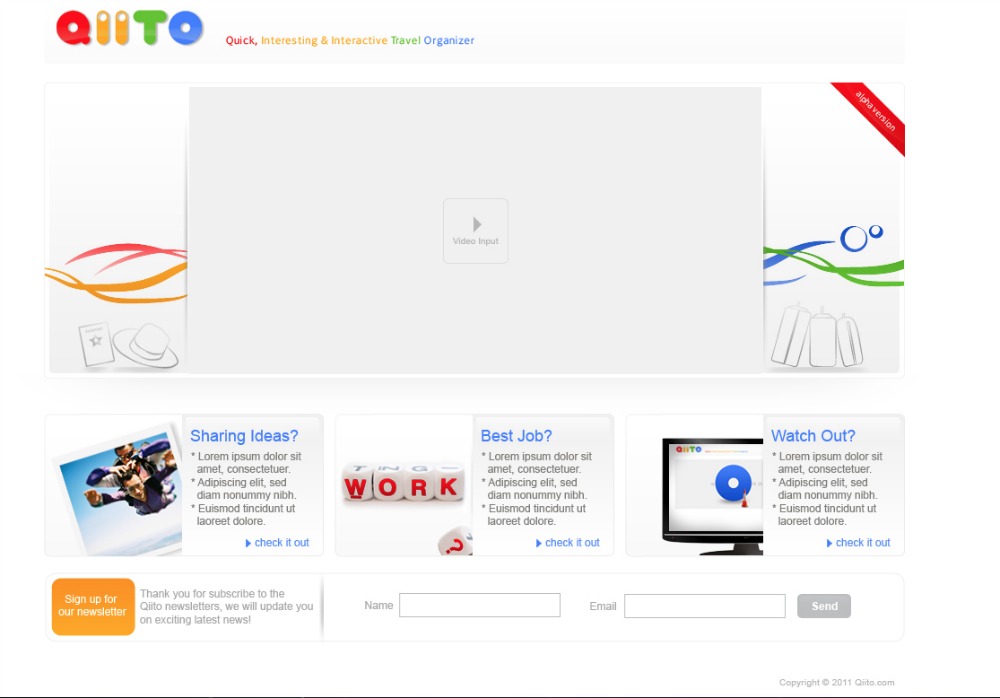 Editor: What are some of the mistakes and lessons you learnt?

1. To stay ahead in the game is to stay closer to users, so you know what they want and enable you to develop the tools they really need. Many start-ups do not last more than a year, mainly because they do not stay close with users and end up losing confidence in what they are building when they don’t get the user response they want and end up giving up.
2. A strong-minded team that stay with you through thick and thin.
Be sure when forming a team, look into not only their belief in the product but also that will believe in the startup life. Because there is no point hiring someone that never reply to message after office hours and never wants to work extra. I am really fortunate to have many good people who are still staying with me and I need to say a big thanks to them. 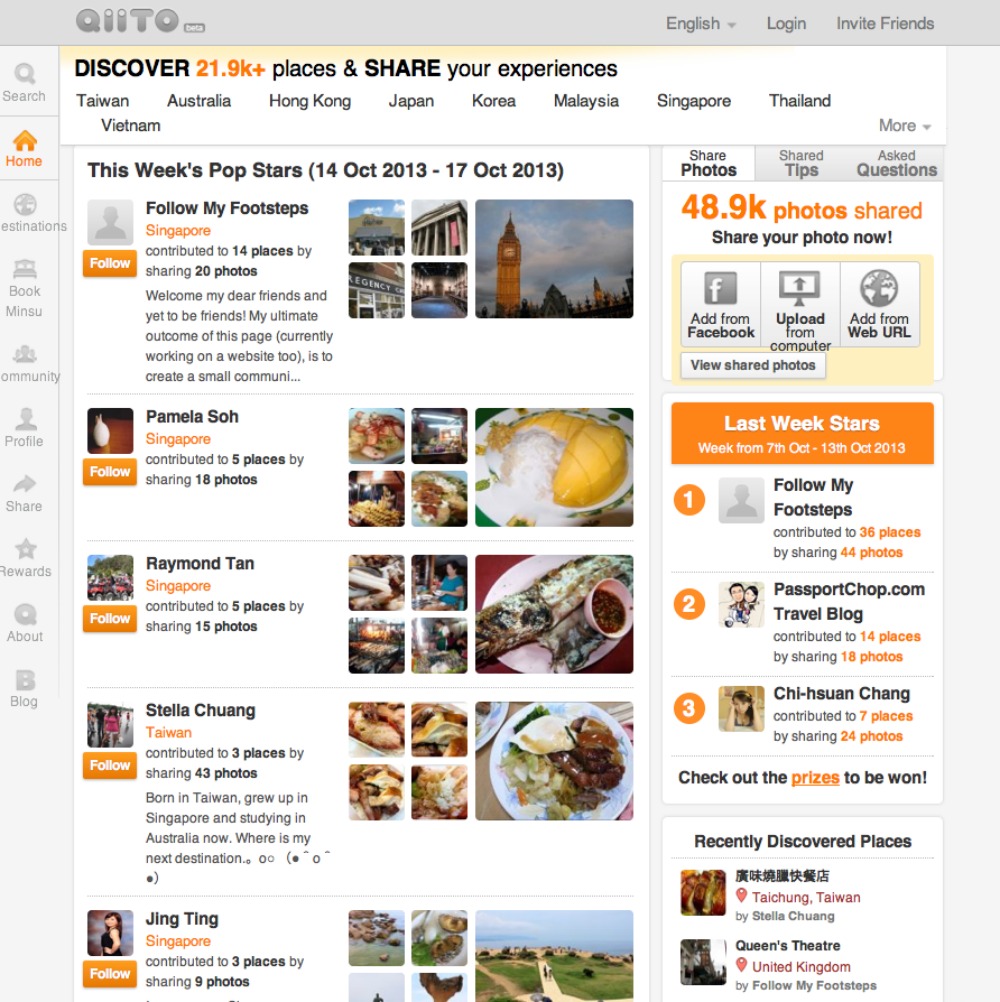 Editor: What is the next big strategic goal for you and the team?

Pei-Han: We have received many complements from our users that they love how Qiito can do for them. Hence our team’s goal is to introduce Qiito to more people and keep surveying our users on what they want, so to keep improving ourselves to better.

Editor: Can you see an IPO
Pei-Han: Currently we are only focusing on building a best & most useful platform for all travelers and people loves to share, hence issue related to IPO has not occurred in our mind yet, after all we only launched for slightly over a year. So it is still a long road for us.
Editor: Any numbers on growth you can share?
Pei-Han: Since we launched June 2012, we had seen our users increased more than 100X and we are seeing steady monthly growth since our new version out in May 2013.
As a platform that encourages social sharing of contents, we are more focused on growth of content that are been shared among users and to facilitate these to be helpful to every users.
We are seeing average of more than a thousand photos/places are been shared each week by our users, and this is definitely great to all users in helping to find new & interesting places to go both locally and overseas,
You can connect with Pei-Han on Linkedin sg.linkedin.com/in/chuangpeihan/