Three months after the submission of the CAMAC Crowdfunding Legislation recommendations we are expecting further delays of 12 – 18 months before we see meaningful change in Crowdfunding legislation in Australia.

Clearly this government has more pressing issues at hand including passing even a few of their budget measures, acting on the recommendations doesn’t appear to be a priority as nothing has been heard of the recommendations since being lodged some months ago and CAMAC has now been disbanded.

Pozible, i-Pledge, The Crowd (as proposed by Mark Carnegie) and CrowdfundUP have all announced they will provide equity platforms when legislation allows.

The delay in updating Crowdfunding legislation is causing major headaches with some of the Crowdfunding platforms deciding to focus their efforts overseas and others using non obvious paths via New Zealand to provide a workaround.

After raising $140,000,000 over the last 6 years ASSOB is claiming its place as the oldest and most successful equity crowdfunding platform (Ed: ASSOB was crowdfunding before it was called crowdfunding). They have been operating in accordance within a well-defined exemption of the Corporations Act. 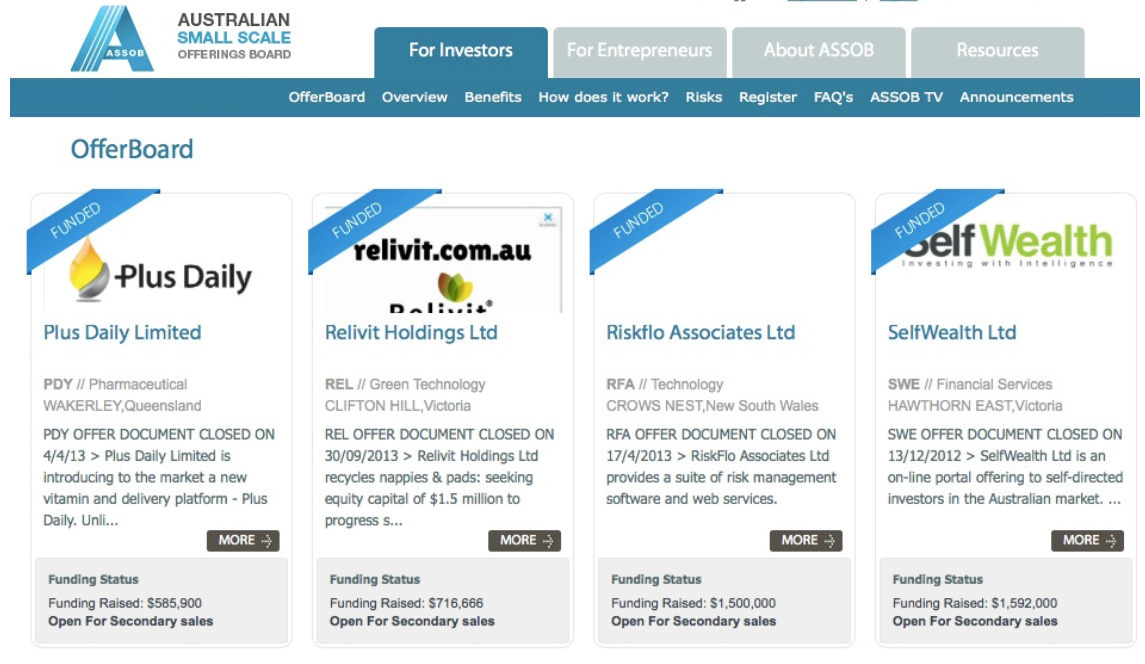 ASSOB can only act as a business matching service and can’t advertise deals publicly or allow participants in the market to do so using social media tools that have become “tools of the trade” in crowdfunding generally.

ASSOB however is ready to transform Crowdfunding locally and recently struck a deal to license its IP to OfferBoard in USA and OfferBoard now has active fundraising campaigns underway.

Yes it appears that despite our home-grown world-class Crowdfunding talent and technology, we can only export it at the moment.

ASSOB has also started a Regional Hub strategy that allows the local community to fund local businesses within the processes of ASSOB and the existing law.

They have started with Far North Queensland (Cairns) and have plans for another 7 Hubs in the near future.

ASSOB is well positioned to spread the word and capacity of local businesses to get funding.

Local Businesses and communities rather than high tech businesses may have a greater appetite for Crowdfunding judging from some of the results from both the UK and USA.

VentureCrowd is the well-backed fund-of-funds operated by Artesian Capital – one of the most active VC’s in the country.

Their platform is only open to Sophisticated Investors ($250k, PA income + or net assets of $2.6m).

This method is legal and probably very good for high net worth individuals that want to play in the startup ecosystem and “pick winners’.

But this model necessarily leaves out a crowd of people that are not Sophisticated and who would like direct equity in the company they support, its a very narrow base.

Probably the most interesting player at this stage is Equitise . Equistise has launched a licensed equity crowdfunding platform within the NZ regulatory framework. 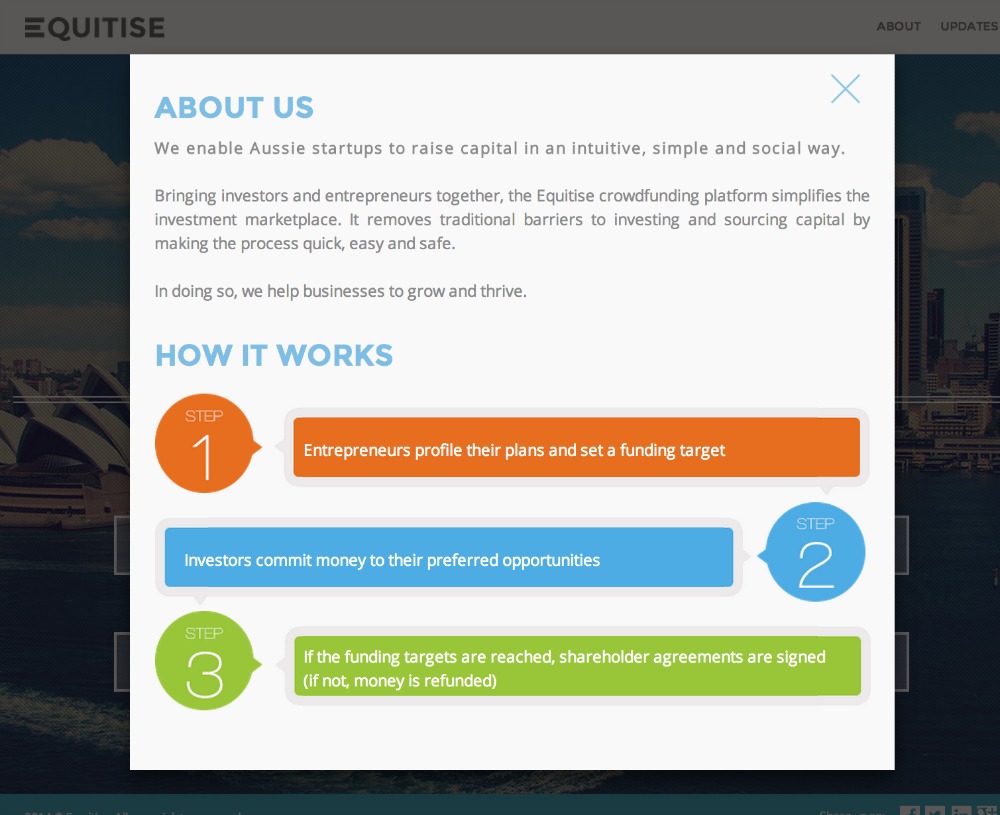 The Australian Law Society advocated such a strategy 3-months ago which is achievable due to the longstanding bilateral trade agreements between Australia and New Zealand that encompasses aspects of financial products and markets. As a result Equitise can now offer a Crowdfunding platform to Australian companies and investors as long as their plans include a NZ branch of the business.

They are in effect an Australian equity crowdfunding platform with access to the Australian market but governed within the New Zealand laws.

This is not a situation any proud Aussie should ignore. We are losing talent and markets for funding businesses to New Zealand!

When we hand New Zealand the mantle of being more innovative than us we might as well collectively pick our sorry butts up and go back to mining.

By delaying Crowdfunding Legislation Amendments Australia has stupidly and unnecessarily ham-strung our startups at a time when sophisticated capital markets of the USA are evolving quickly and the red-hot Asian markets like Singapore or Hong Kong are taking off.

For many years our established startups have had to move to the US to access growth capital, while access to local Angel & early stage funding market appears to be improving Crowdfunding holds the promise of allowing startups to access a wide base of local funding, but continued delays along with the destruction of Commercialisation Australia means that the startups of 2013-2015 will probably have to go offshore to get funding.

Despite the self harm our government is causing with the delays to Crowdfunding legislation it is great to see the likes of ASSOB, VentureCrowd and Equitise finding ways to meet the market needs.