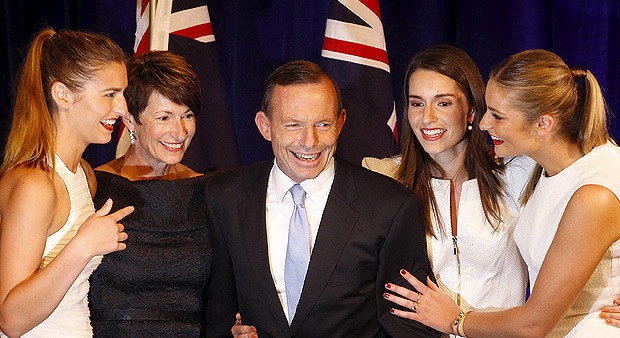 It’s Sunday morning and Tony Abbott has just got off his bike after a long ride on the Northern Beaches (no stop for a Latte?) after a landslide win which I think surprised everyone, 3 months ago I believed we were staring at a freeway crash in motion, horrific wreckage, it looked to me that Liberal was on track to lose the unlosable election. Fast forward 3 months and they have had a resounding win. Well done.

I am reasonably pragmatic, I have been a Liberal voter most of my life and although extremely disillusioned this time around with both sides of politics I don’t think the Liberals could pay any less attention to small business or harm them any more than Labour so I am hopeful that at the very least they will get out of the way and remove some roadblocks.

So what does the Liberals stated policy mean for Startups, those in Technical and Scientific careers and Higher Education?

Well perhaps I missed it but I couldn’t find an individual Policy Document dealing with Higher Education and Research, Development, and Commercialisation. Nor could I find specific policies on Venture Capital or Start-ups or measures designed to increase the number of new startups or keep recent startups alive.

There was precious little real policy measures encouraging new technology development or focus on manufacturing or clean energy. All focus appeared to be on existing small business, eliminating carbon tax and reducing red tape which are very positive but not particularly interesting to the readers of this site.

Whilst there are some very positive policy initiatives which I detail below, the challenge with reviewing the main Liberal policy document is trying to sort out the motherhood from actual policy measures, which are sadly few and far between with little detail. 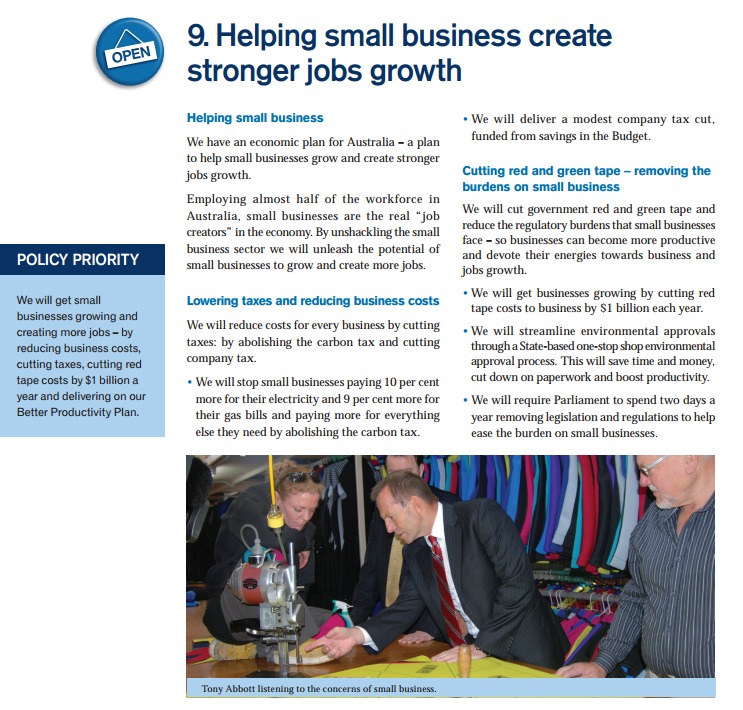 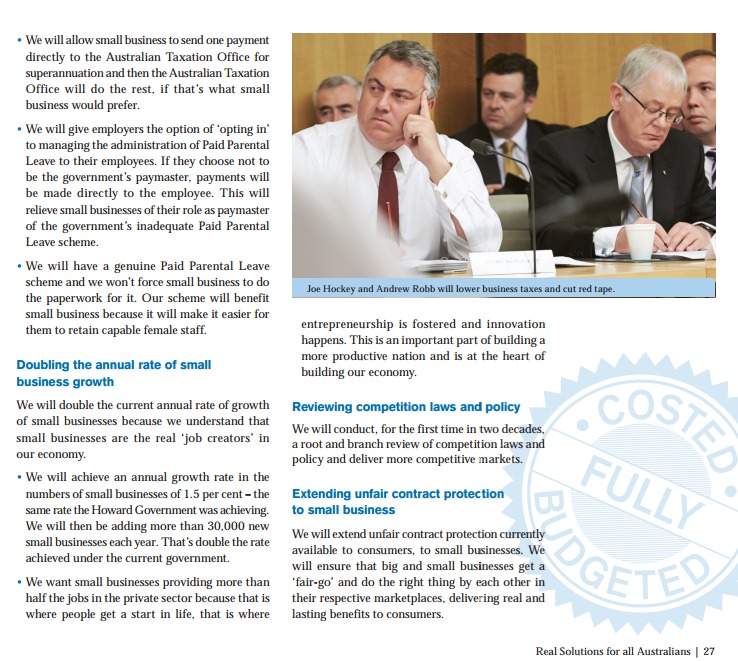 Whilst the removal of some of the red tape is very positive especially around administering super, tax and parental leave unfortunately the rest of the policy document is silent on real measures about driving new business creation and growth.

Removing costs of the carbon tax and lowering taxes will be positive for small business but mean very little to startups.

Having said that at least the Libs are pro business, they seem to get it private enterprise, even if they are slightly removed, in my opinion the Labour Govt especially Julia did not understand small business or entrepreneurs, it seemed beyond them why anyone would be in business, almost like they shouldn’t buck the system, preferring that people should be in jobs with unions and the government would take care of everything.

Having started a few businesses I have personal experience on how hard it is and how much risk you expose yourself and your family to. Most of the country does not understand how hard it is to launch a successful business and the years of suffering or living below what your contemporaries are earning in their jobs in order to bring a business into existence.

If we agree that we want more businesses started and we want more to survive and grow, then it holds that policies should be formulated to help entrepreneurs launch new startups and keep those growing.

Sadly there is zero in the policy about any such measures.

It makes me laugh we pay the dole to working age people indefinitely, we pay students an allowance for 4 years for a degree but if you want to try to start a business you are absolutely on your own when arguably the business would produce a far greater national benefit than any of these. 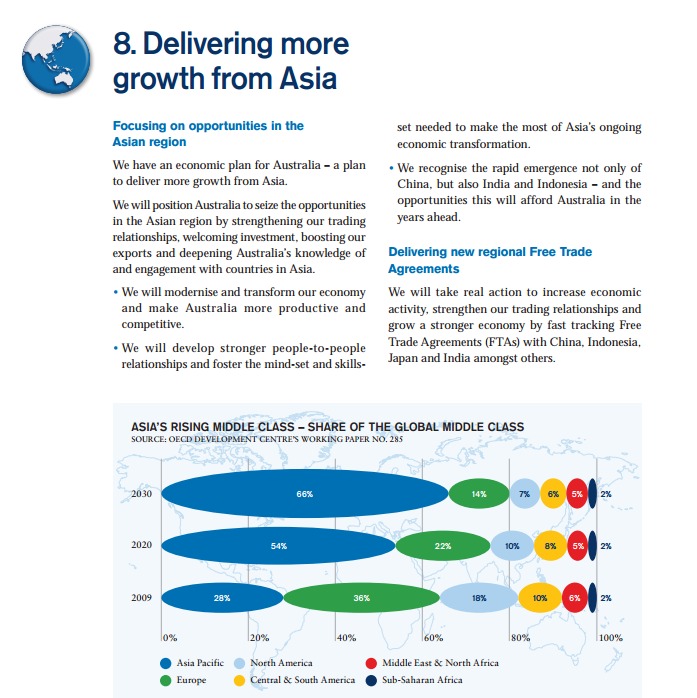 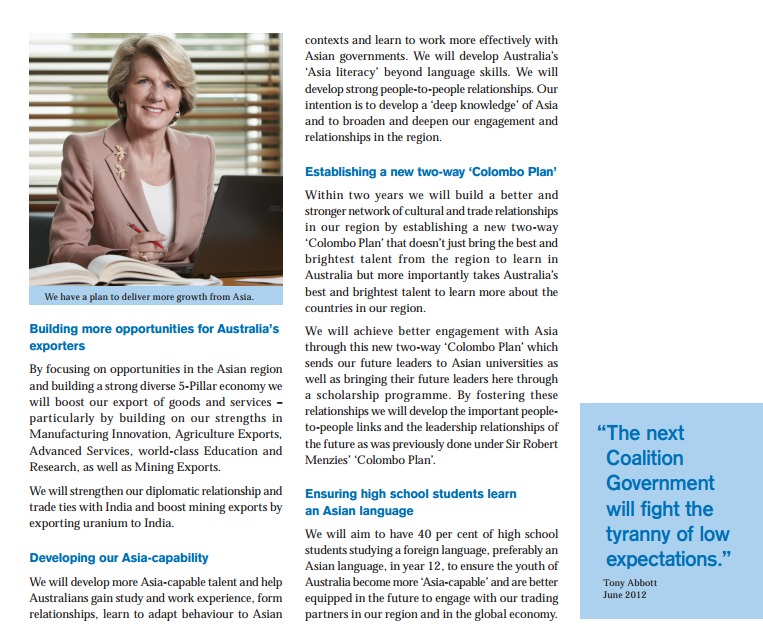 Whilst there is much motherhood in this section and little detail about developing an Asia Capability, the Colombo Plan and the goal of getting 40% of high school students studying an Asian language look like very positive initiative, though there is scant detail on the execution.

My comments are brief, as there is nothing to comment on, again there isn’t much in here for startups or the tech/science. There is a throw away line about ensuring businesses have the right incentive to invest in R&D but no real measures or policies. 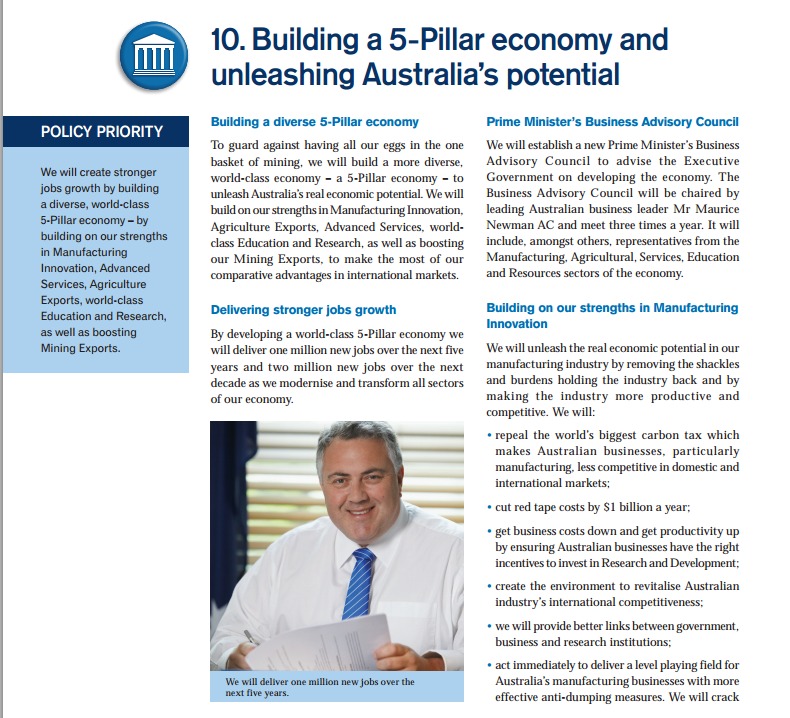 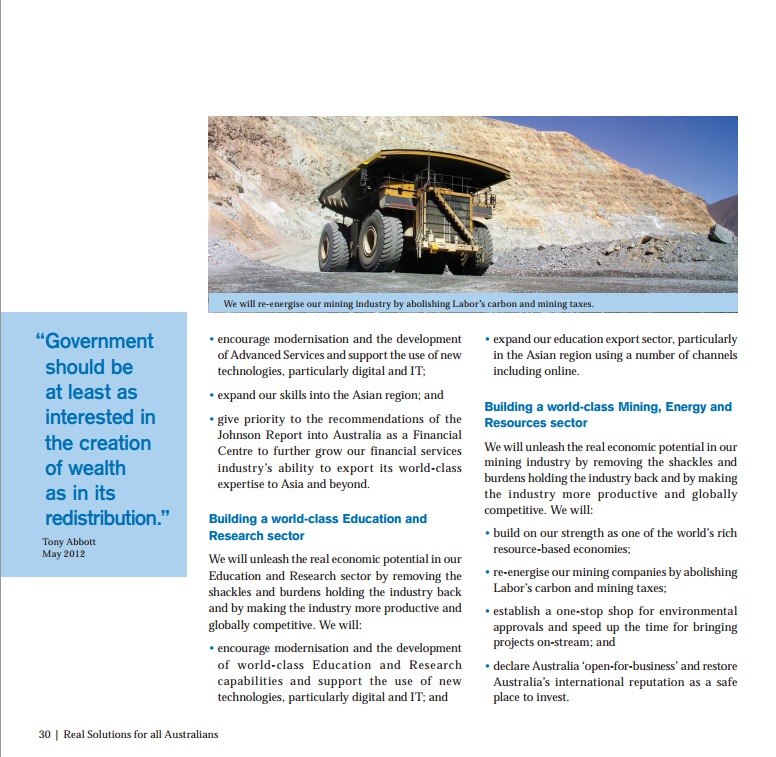 As far as building a world-class Education and Research Sector, aside from the R&D tax changes detailed below and Streamlining Medical Research I could not find any detail, not a single solid measure, initiative or policy concerning these areas.

The two key winners out of this is the Reduction of Red Tape by providing systems to allow one payment to the Government to cover all tax and super requirements. This is a big improvement.

The Company tax rate cut is nice but it won’t change much for creating new startups or even growing existing small businesses. Most of the rest of the policy is incremental in my opinion and is repetition from other polices such as NBN and Carbon Tax. 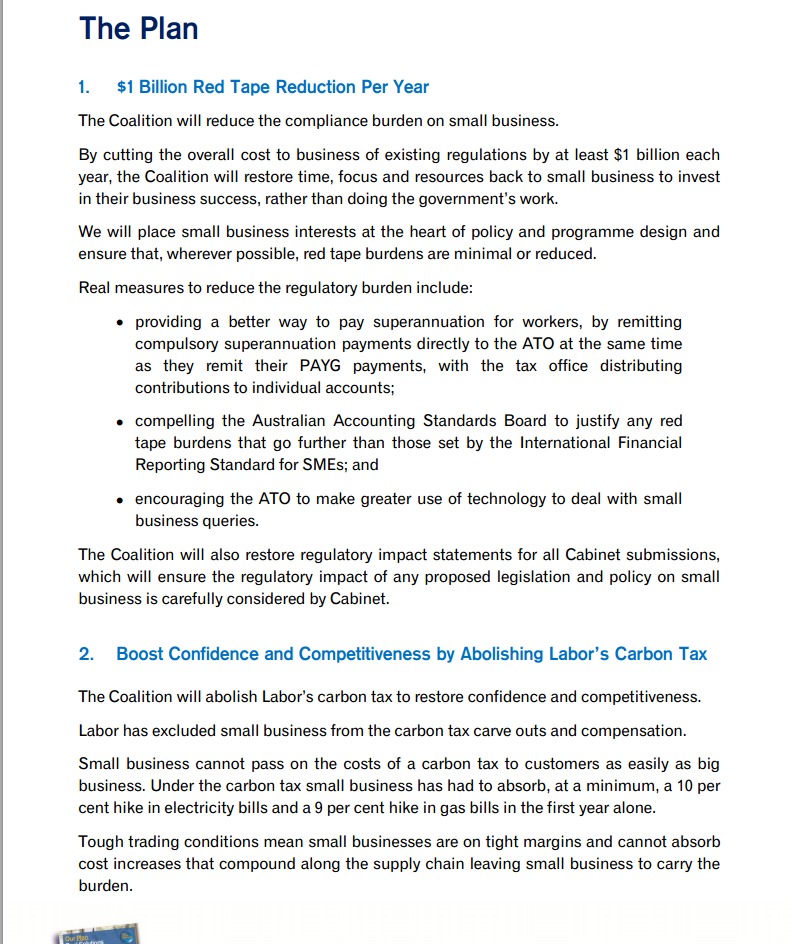 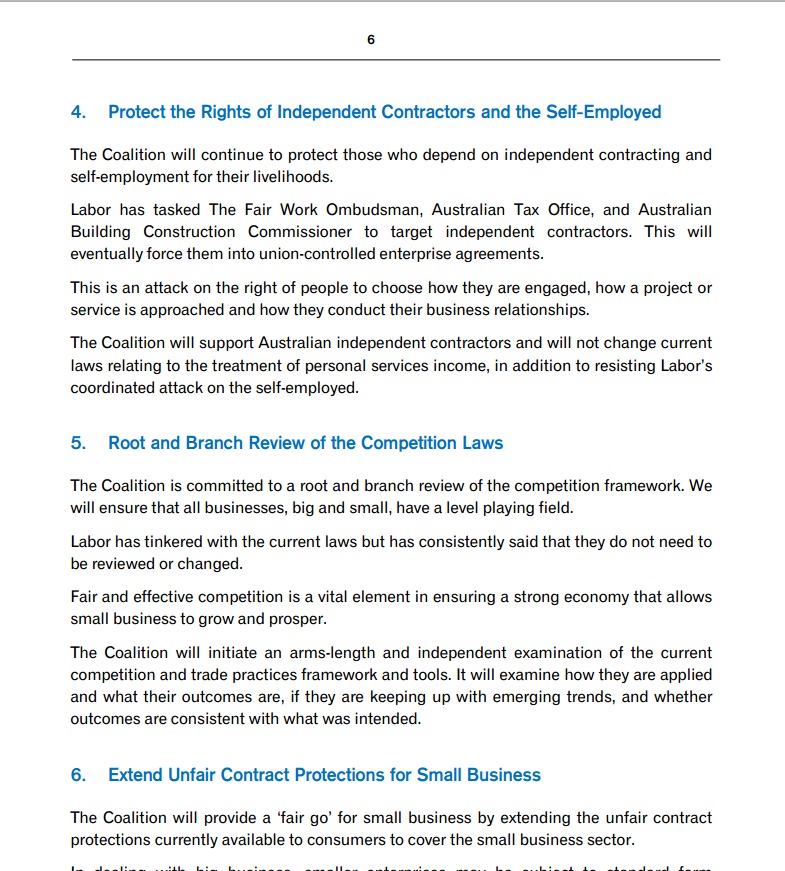 This is mostly motherhood but has some winners in particular Page 19 and 21, however you can’t help but think a simple statement like Obama that all Government Departments will have an API would have served us better. 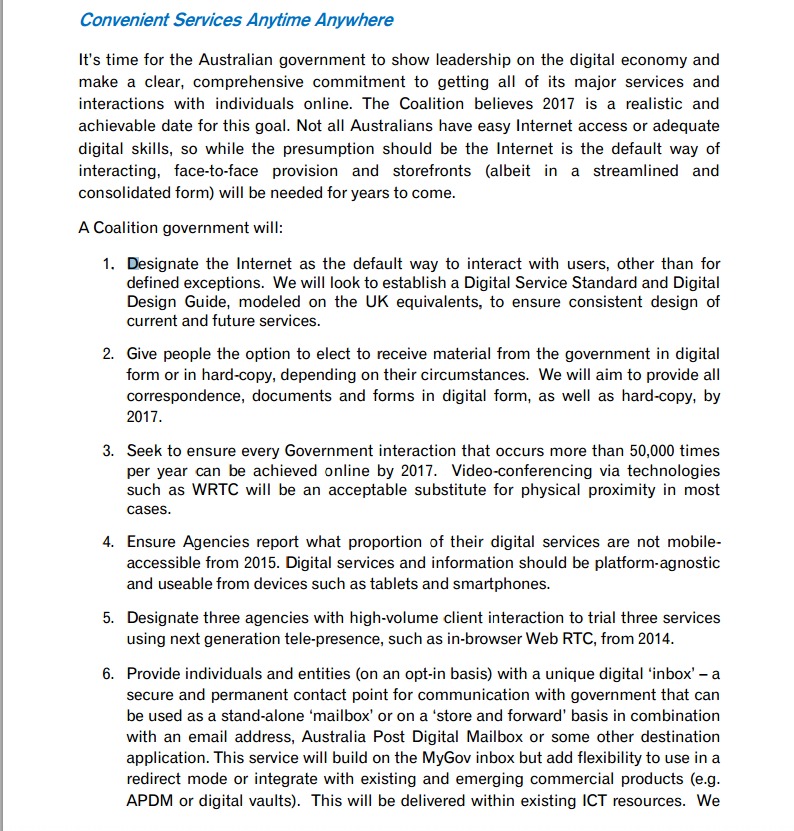 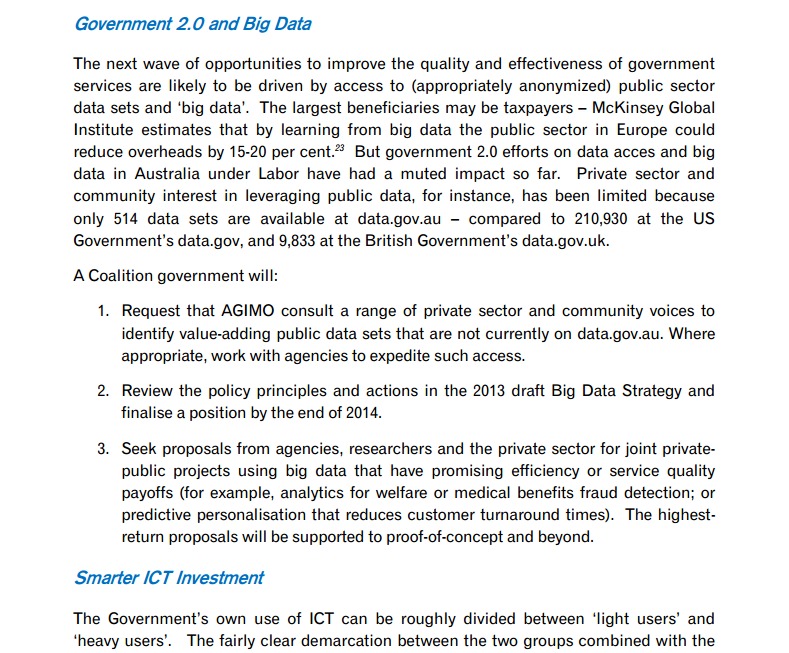 A positive from this policy document is the statement that the newly appointed “Minister for Trade and Investment will be a sales rep for Australia”. If this is true and he is measured on real “hard numbers” export sales or incoming investment this is a big step forward. If they are measured on hard numbers, they will be keen to drive initiatives that help make their numbers, the jury is out on this and we will wait to see the real role and its measurements.

Some positives from this policy are below, encouraging Export Market Development is great initiative as is creating a 2nd stream of R&D Incentives similar to the old R&D policy cut by Labour. Not sure about the Manufacturing Transition Grant, sounds like more Car grants and subsidies to industries in decline. 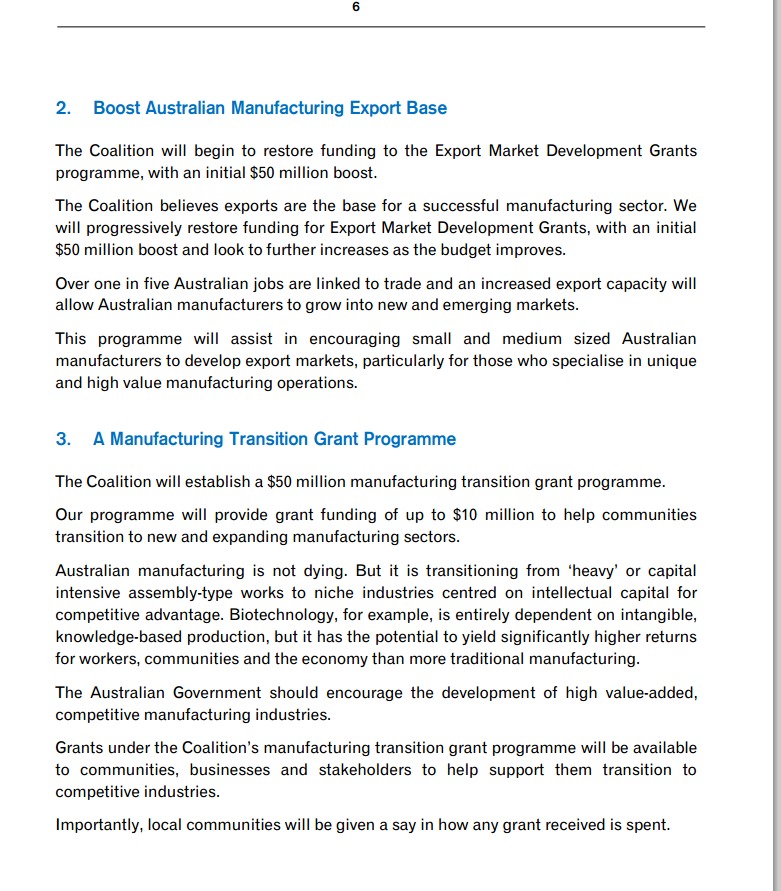 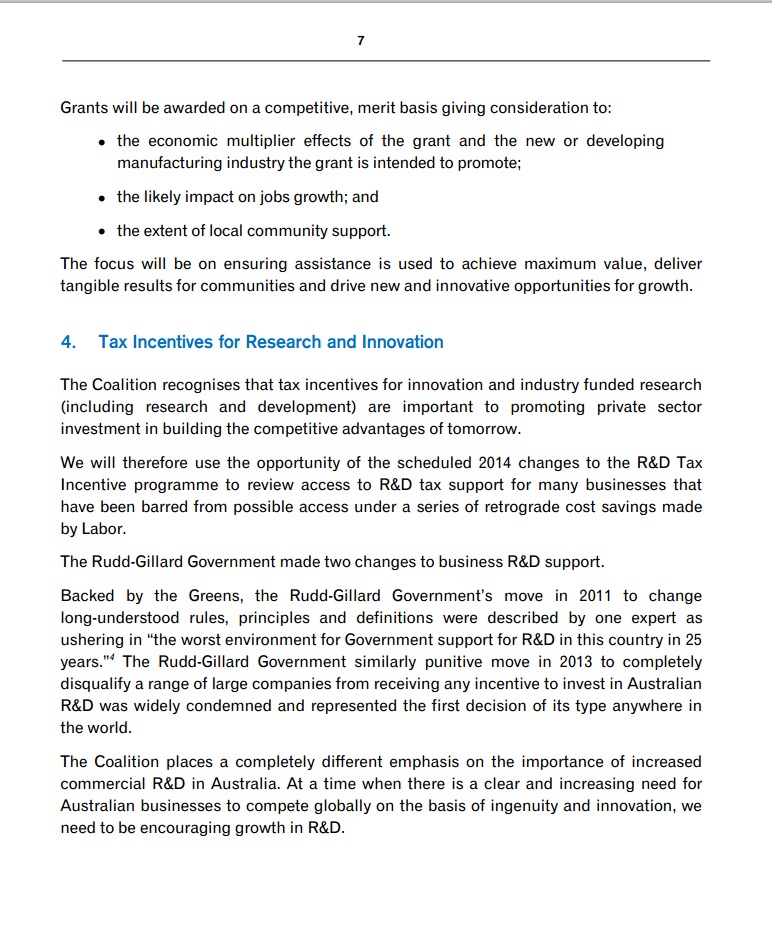 For many years I have been against the NBN in its original format, having studied the Cable rollouts of the early 90s and seeing that despite having very fast access there was a relatively low take up I seriously doubted the value the country would receive a significant gain from running fibre to the home.

If you think about the use cases for the average home of broadband they are video conferencing or video for education or entertainment, online TV movies, gaming and teleworking.

I spend 1-2 hours a weeks on video conferences with overseas and it pretty well works flawlessly most of the time. Just about all of these use cases work fine with few issues on the dodgy connection I have 2km from the exchange running a degraded version of ADSL2+ at around 10mb.

25mb would be great however 100mb seems to be way above what most users are going to need any time in the foreseeable future.

If we accept that most use cases for the foreseeable future for home broadband are to do with entertainment (I will argue this until I am black in the face) then why should the tax payer be subsidising this. In my opinion we should provide infrastructure to the node so that those who need more than the basic service can order what they need.

I saw Matt Barrie of Freelancer.com on a Startup Panel talk recently, when asked about the NBN he was truly frustrated by the time being wasted on the discussion, in his view it didn’t matter we were going to get fast broadband regardless of who was in power and I agree.

I like the revised version of the NBN under the new Government. In my day job I spend a lot of time looking at new inventions in the data centre, high-speed optical networking and mobile, I see people like CUDOS at Sydney University putting 10Tb across 800+ KM, I see new wireless standards wringing 1300Mbs out of existing spectrum, the tech advances in high-speed wireless and DSL move far faster than we can lay fibre.

Fibre is the undisputed king from the data center, Internet Exchanges and Providers to the local Node or street cabinet, but my view is that there is a lot of easier ways to get this to the home including wireless and newer high-speed versions of DSL from the node to the premises.

In my view we will see a much faster rollout under the coalition, on average Australians will see an average speed increase much faster, truth was under the old NBN most of the country was going to be waiting many years for the fibre My suburb is not even on the NBN roadmap and I am 50 min from the CBD on a good day, I can see suburbs across the river that have NBN but it was unlikely to make it to our suburb of a few thousand people within 5 years.

Under the new policy I would suggest that a lot of the fibre to the exchanges probably already exists, fibre to the nodes is relatively easy as pre-existing conduits exist and the copper exists to support higher speed DSL. In the cases of apartments who have NBN going past but seem to be landlocked, the solution is easy, put a VDSL switch in the local exchange or street cabinet and they have high-speed access.

The roll out should be much faster for the average user and I think this is a positive.

In summary not much changes for start-ups, Higher Education and Commercialisation and High Tech industries and entrepreneurs which is disappointing.

As always I appreciate your comments below.