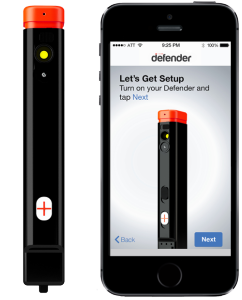 I like the services revenue model, although I think it is probably a little pricy per month for your average student it will find a home in the wealthier campuses and neighbourhoods.

Using a piece of hardware to lock in annuity revenue is a great business model, assuming its useful and customers believe its really is protecting them, is probably pretty immune to customer churn due to the uniqueness of the hardware.

The Bill of Materials and build cost on something like this would probably run $40-60 depending on how much work is being offloaded to the Mobile App so payback would be in the vicinity of 6 months, assuming they can convince the user to sign on for a longer term agreement, they will have a nice annuity revenue stream.

The Defender is launching a Crowdfunding campaign shortly, however no details were available at time of publication.